Mathieu Miljavac is more than a simple artist who has found in taxidermy a medium to express himself. Poet above all, he hides the sensitivity of those who feel the world with intensity and melancholy. Like his work. 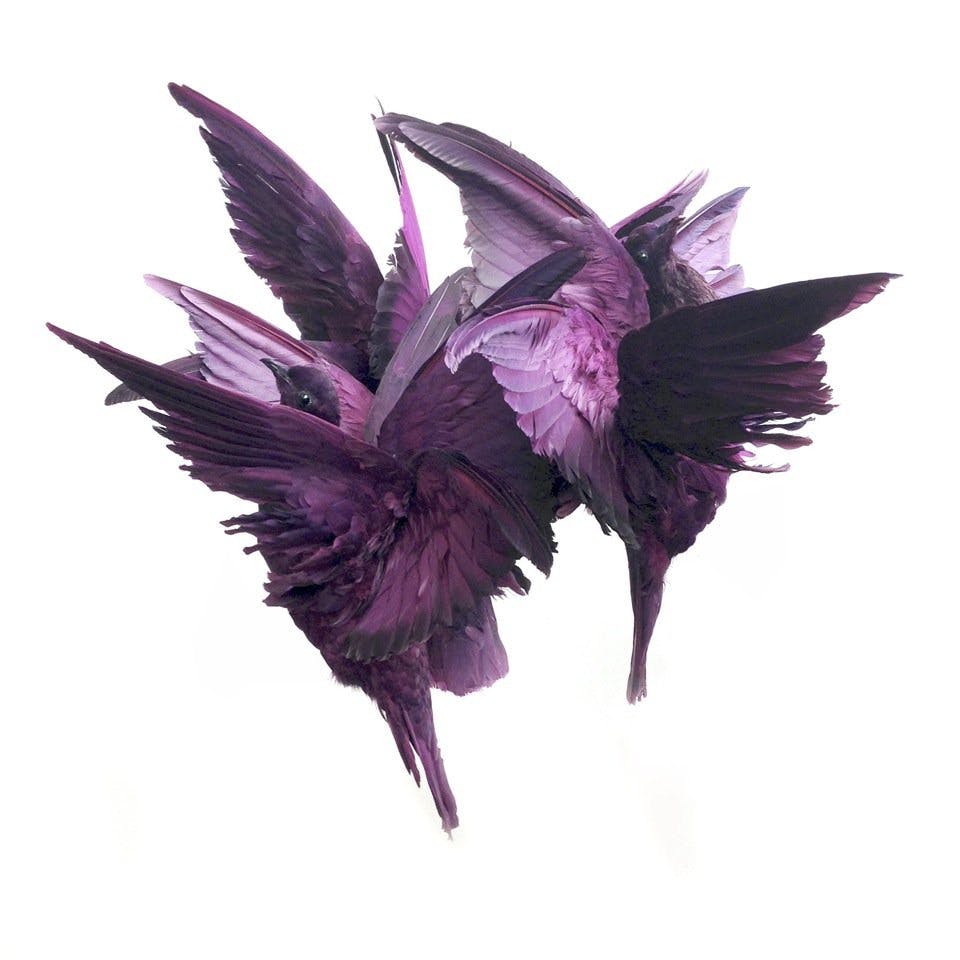 His birds, straight out of supernatural dreams where black and light mingle, reveal themselves as fantastic animals in a perpetual ode to movement. Spreading their wings, noble in their staging, they evoke the supernatural, the strange, and the simple and pure beauty of nature. 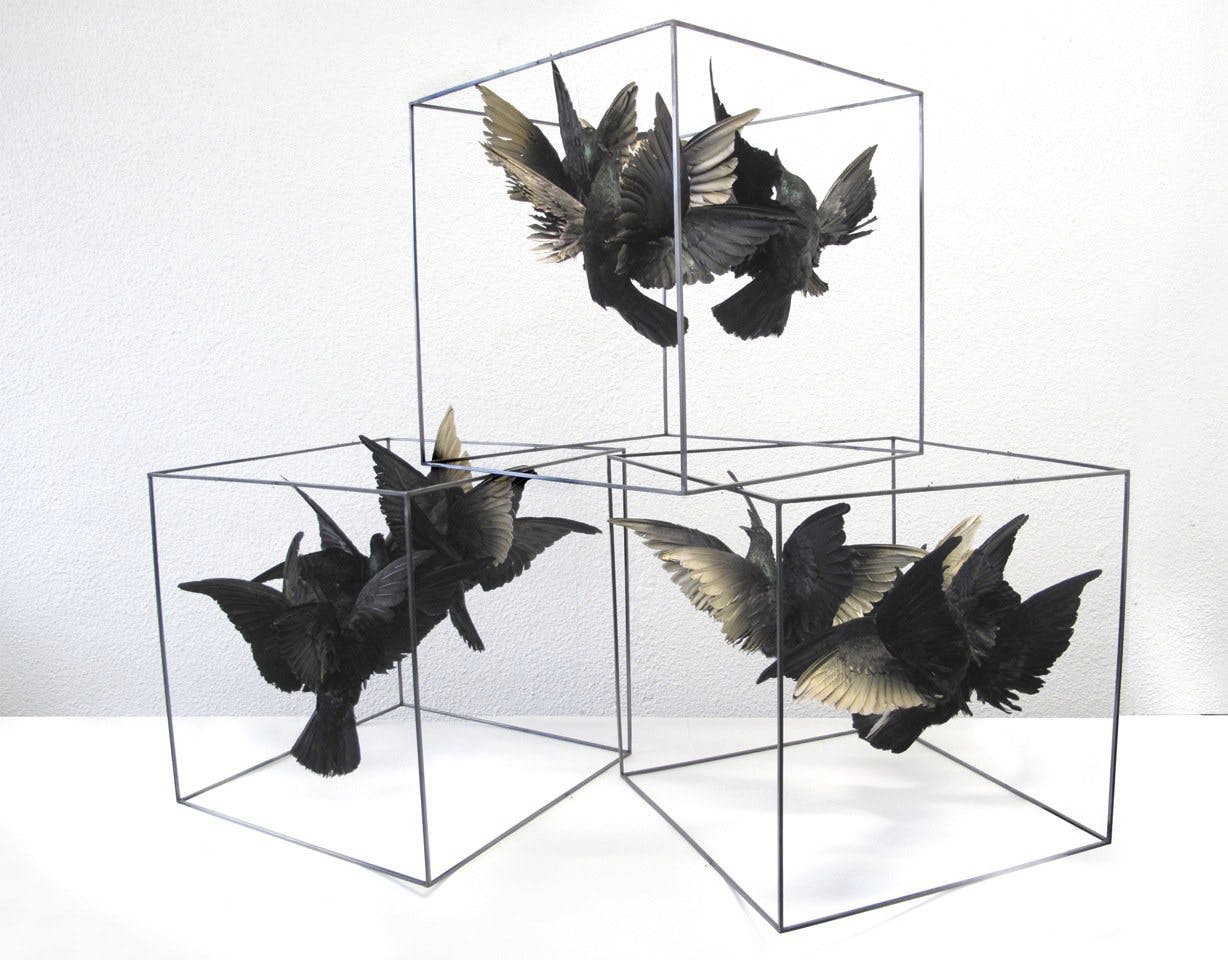 "Beauty lies in the eye of the beholder". Like Oscar Wilde, and others before him, Mathieu Miljavac seems to make his own, through his work, the accuracy of this adage. Hidden beauty, it asks to be tamed to reveal itself completely, luminous. 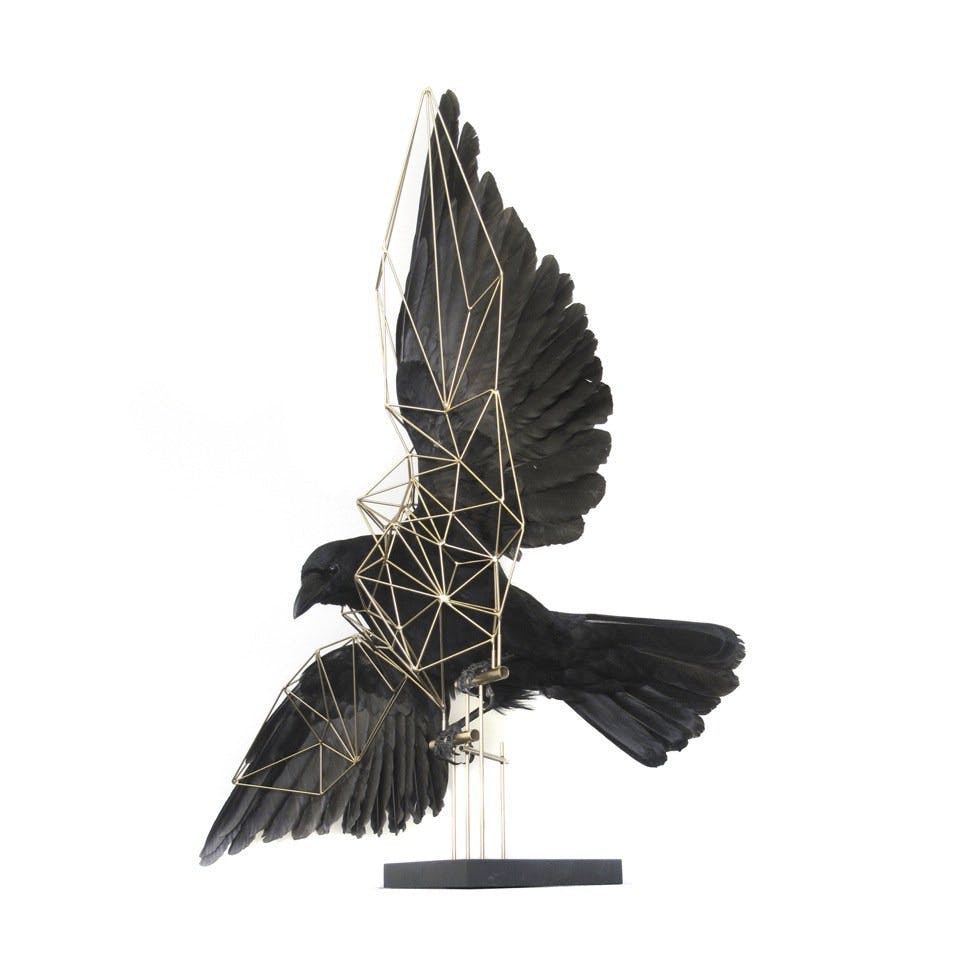 Leclaireur: You started in fashion...

Mathieu Miljavac: When I left fashion design school, I worked in fashion, it's true, holding different positions for several years. I was also a graphic designer, I worked in events, even floral decoration!

L: How does a fashion designer decide to start doing taxidermy?

M: I have always loved taxidermy, ever since I was a kid. I remember an old stuffed owl at my grandparents' house, it always fascinated me. One day I came across an article in a newspaper that talked about this new generation of artists who use taxidermy a lot. I can still see myself with the magazine: I don't hear anything around me anymore, it's a revelation, I told myself I had to do this. That said, for me, it's just a technique that I use, that allows me to show a beauty that you don't necessarily see, neither in traditional taxidermy, nor in the animals I use. I don't really consider myself a taxidermist.

L: What was the first piece?

M: A seagull, in Scotland. Naturalization is quite legal in the UK, absolutely not in France. The first piece I did on my own was a pigeon that looked more like a chicken than a pigeon. That's where I started from...

I work a lot from the pigeon. When I started taxidermy, it was the only animal I found. I found it interesting to work with a very ordinary animal, which is not very well thought of, and to turn it into an extraordinary animal, in order to show a beauty that we don't necessarily see. 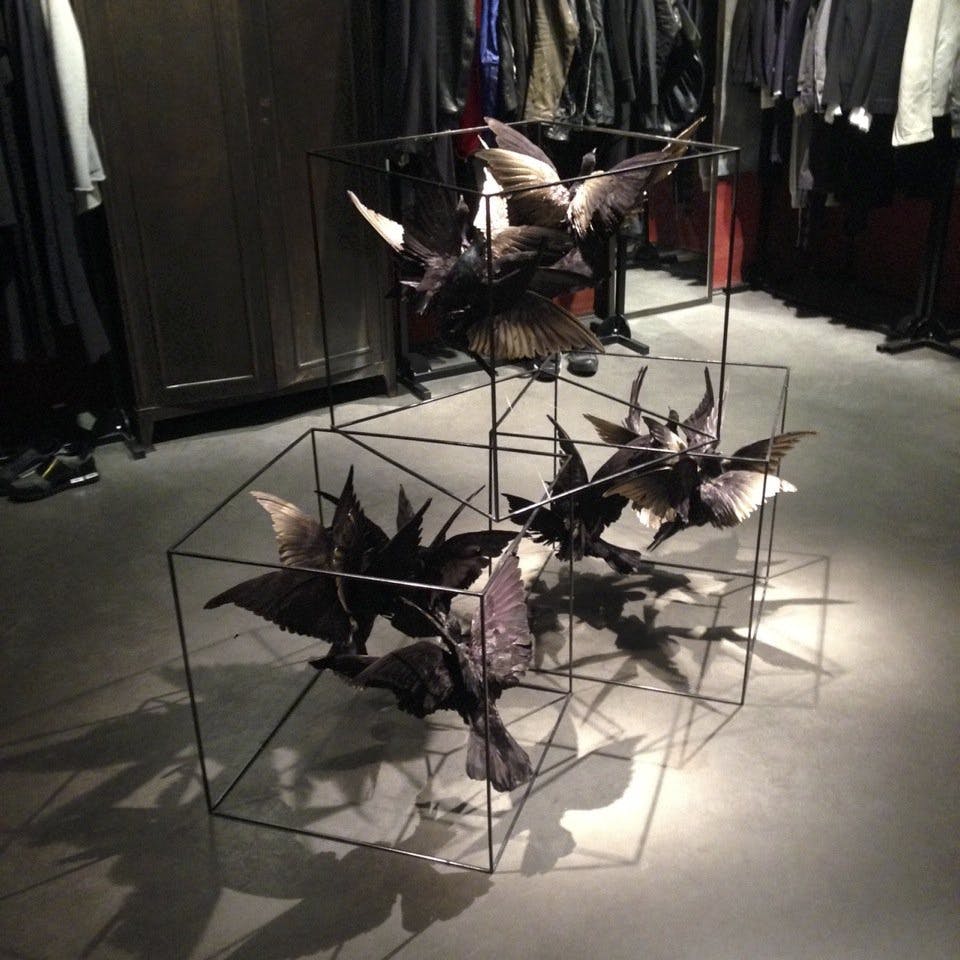 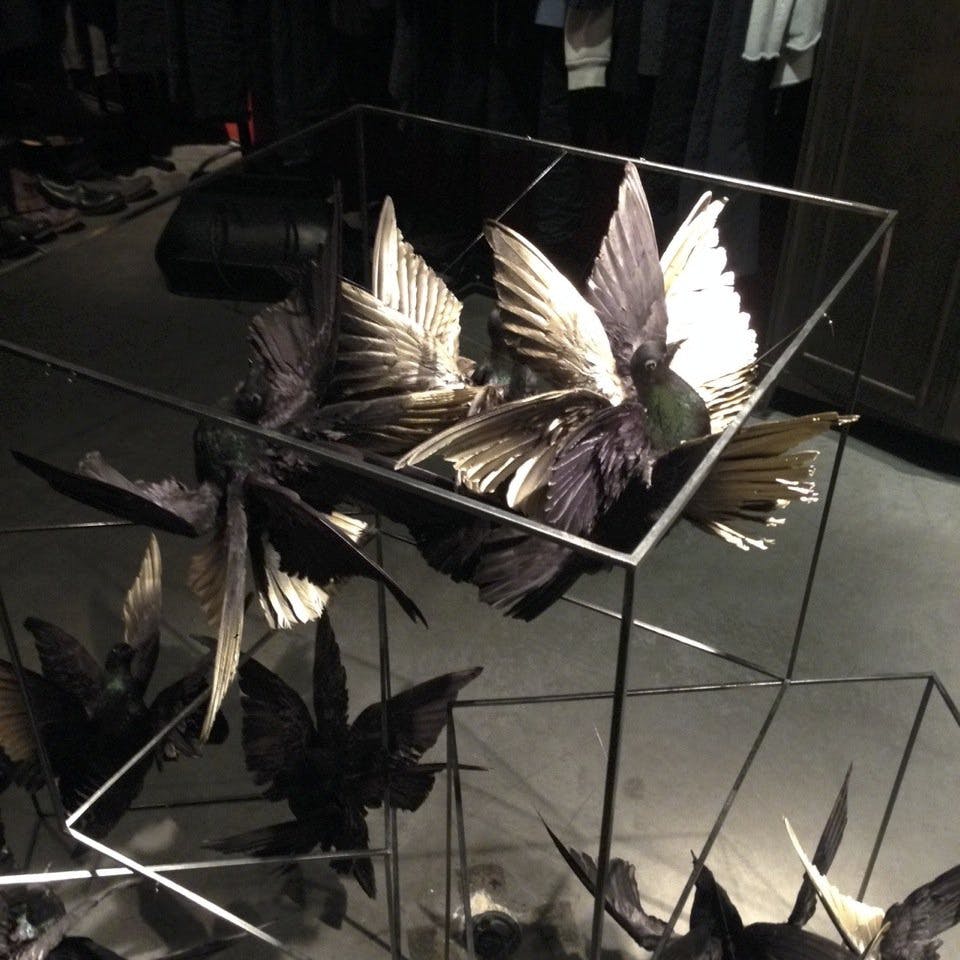 L: Taxidermy sometimes gets a bad press, even today. Especially in relation to animals.

M: We no longer kill animals to naturalize them. There are extremely strict regulations, we absolutely cannot take an animal in its natural habitat, in the wild, to naturalize it.

All exotic animals, those that we can see in stores or in museums, come from zoo breeding, where they all died naturally.

L : How did you approach your first pigeon?

M: I approached it with a lot of apprehension. I didn't know the technique at all at first, and the pigeon is a very difficult animal to work with, with a very thin skin. The first one took me two days, instead of one today, and the result was, honestly, questionable.

What fascinates me about birds is the symbol of freedom they represent. And with pigeons in particular, it is that they are animals for which we have no consideration. We pass them every day in the street without looking at them, even though they are part of our daily life. I like to start from this very concrete element of reality and transform it completely, as an escape from reality, a way of diverting it to show an aspect that we don't usually see.

L: How do you reproduce the movement of a bird?

M: I am very inspired by contemporary dance. Every time I do a big installation, I watch performances by Pina Bausch or Trisha Brown. They are a constant source of inspiration. Then I start from the movement of the animal, I stretch the wings to the maximum, for example, to create a movement which is not necessarily natural but which will still sublimate the flight, and amplify the natural attitude of the animal, carried to its paroxysm. 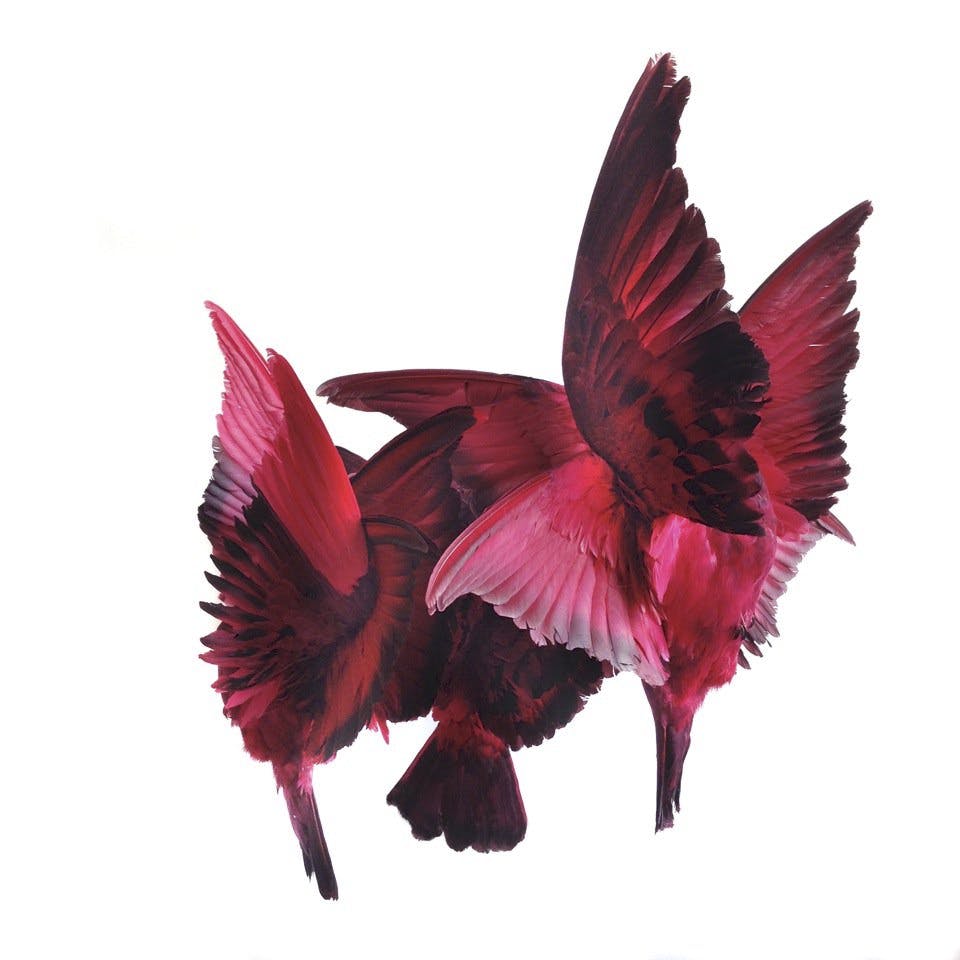 L: At what point do you go beyond the strange to the beautiful?

M: It seems to me that the limit lies first in the respect of the animal. As long as we respect the animal, we are in the beautiful. The bizarre, the strange, appear when we try to take precedence over the animal, over what it was, over what it has lived too. There, it can become bizarre, and sometimes disturbing.

L : As an artist, any influences from other artists ?

M: There are many, especially in contemporary dance: Trisha Brown, Pina Bausch, Sidi Larbi Cherkaoui, Preljocaj also. On the pictorial level, Francis Bacon knew how to retranscribe in his own way the violence of movement, in his characters, in his portraits. There is a kind of deconstruction of movement in his work that fascinates me. I also like his way of adding a frame to things. I work on structures, which was done unconsciously at first, but when I look at his paintings, I see his influence. And there is literature, of course. Murakami, an author I adore, has this very subtle way of moving from reality to an imaginary world. It is an approach that nourishes me enormously.

L: What is the meaning of these structures that you evoke?

M: Originally, the idea was to hijack the cage, but I quickly realized that it went far beyond that. I worked a lot on the welding, the metal structures around the crows in particular, and I realized while doing so that there was a real personal meaning there, of the order of the intimate, almost psychoanalytical, even if the word is a bit strong.

The first time I welded a structure around a raven, when I was done, I looked for a name. The only one I could come up with was "I pretend I can't see". Suddenly, I understood. It was a direct response to an emotional situation I was going through, which was manifesting itself in my work.

L: What are the reactions to your work?

M: Taxidermy provokes quite strong reactions, there is rarely an in-between. After the first moment of astonishment, which is frequent, people see beyond the simple naturalized animal. That's what makes me happy, to break this preconception, to lead them to something beautiful that speaks to them, that touches them...

L: When did you first meet Leclaireur?

M: I was a student in fashion design, a good twenty years ago. I remember being taken to the boutique in St-Germain, it was a revelation to see the clothes and the vision, the one that Armand Hadida had from the beginning, that he knew how to develop and maintain. Twenty years later, I sent an email to Leclaireur, talking about my work. We studied a project together, this large installation of black birds that fly away in the form of a whirlpool. At the beginning, there was a desire to create a specific project for Leclaireur, a flight of fifty black birds, something quite dark, for the space of the rue Hérold. I wanted something that would be both light because of the movement, because of the birds, but also distressing, while being very beautiful. My collaboration with Leclaireur was interesting. Armand Hadida showed the clothes in a completely new and innovative way, which is what I try to do with the pigeons.