What do James Dean, the gold rushers, Kurt Cobain, Marilyn Monroe, you, us and just about everyone else in the world have in common? The jeans, without a doubt.

Today, jeans appear in (almost) every collection. Slim jeans at Balenciagapunk style at Balenciaga, leggings at Saint Laurentit can be found in two colors at Monsegiving the illusion of combining two different jeans. Natasha Zinko makes the bet to associate the jeans with its version shorts, and always with the eliminated edges. Rick Owensproposes to wear it as a corsair while Y/Project invites us to wear it high or low, or even both at the same time. 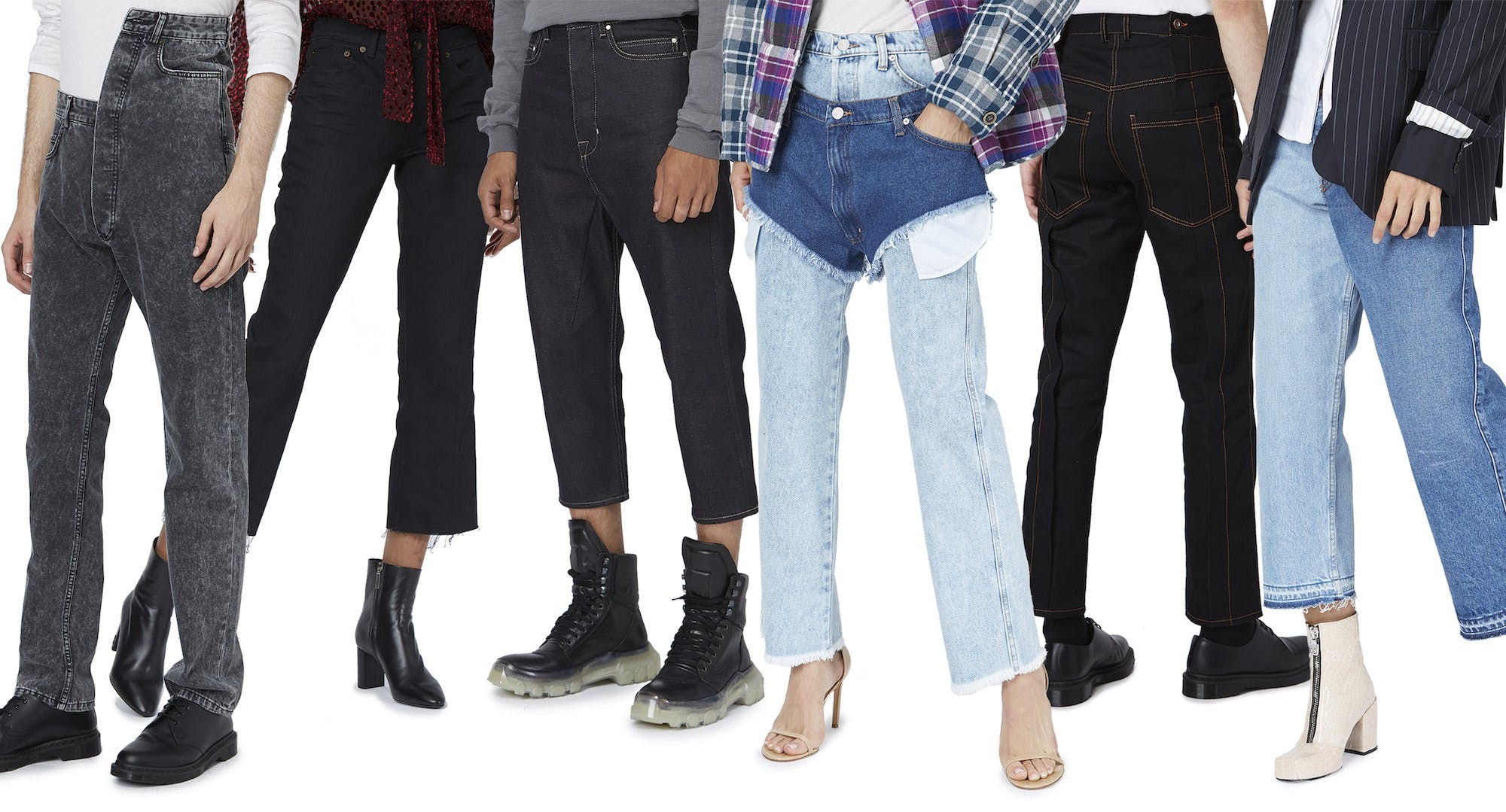 The jean is a must have, a piece whose origins go back to the 14th century, and whose geographical origins take us to Italy, France and the United States. Here is its history. 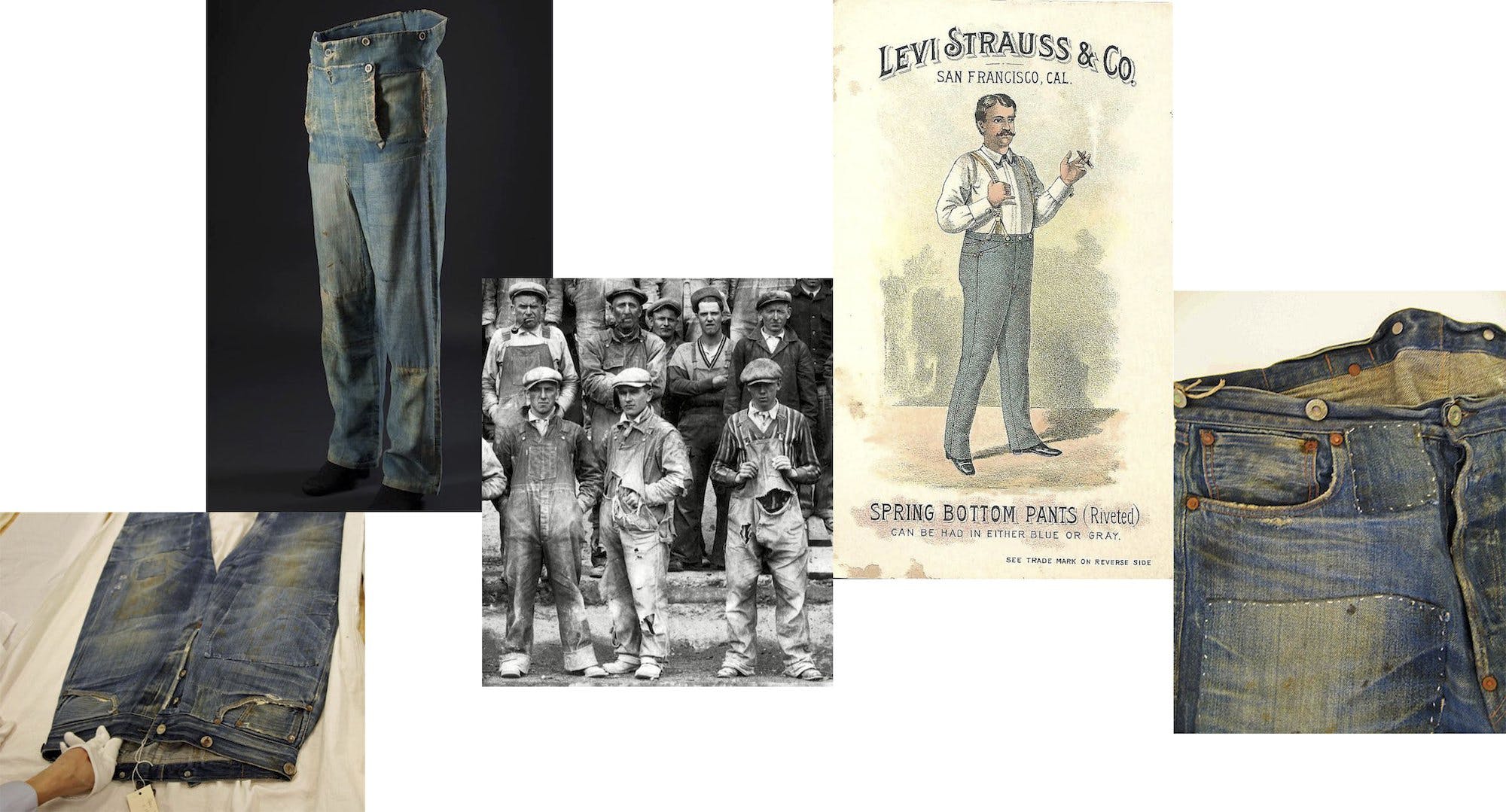 Denim is first and foremost the name of a cotton and linen fabric, blue in color. It was first used in Italy in the 14th century, in the regions of Milan and Genoa, where farmers and sailors used it for clothing or to make sails for ships. But the popularity of jeans as a garment really took off in 1847, when a certain Levi Strauss emigrated to the United States. This Bavarian emigrant settled in San Francisco in 1853, where he created the brand Levi Strauss & Co. or Levi's. In the midst of the gold rush, he sold denim to the gold diggers who, with their noses in the mud, did everything they could to find their vein of gold and realize the American dream. Levi Strauss used Nîmes cloth, a wool and silk twill, otherwise known as Nîmes twill, produced in the Languedoc region of France since the 18th century. According to legend, the word denim comes from there. 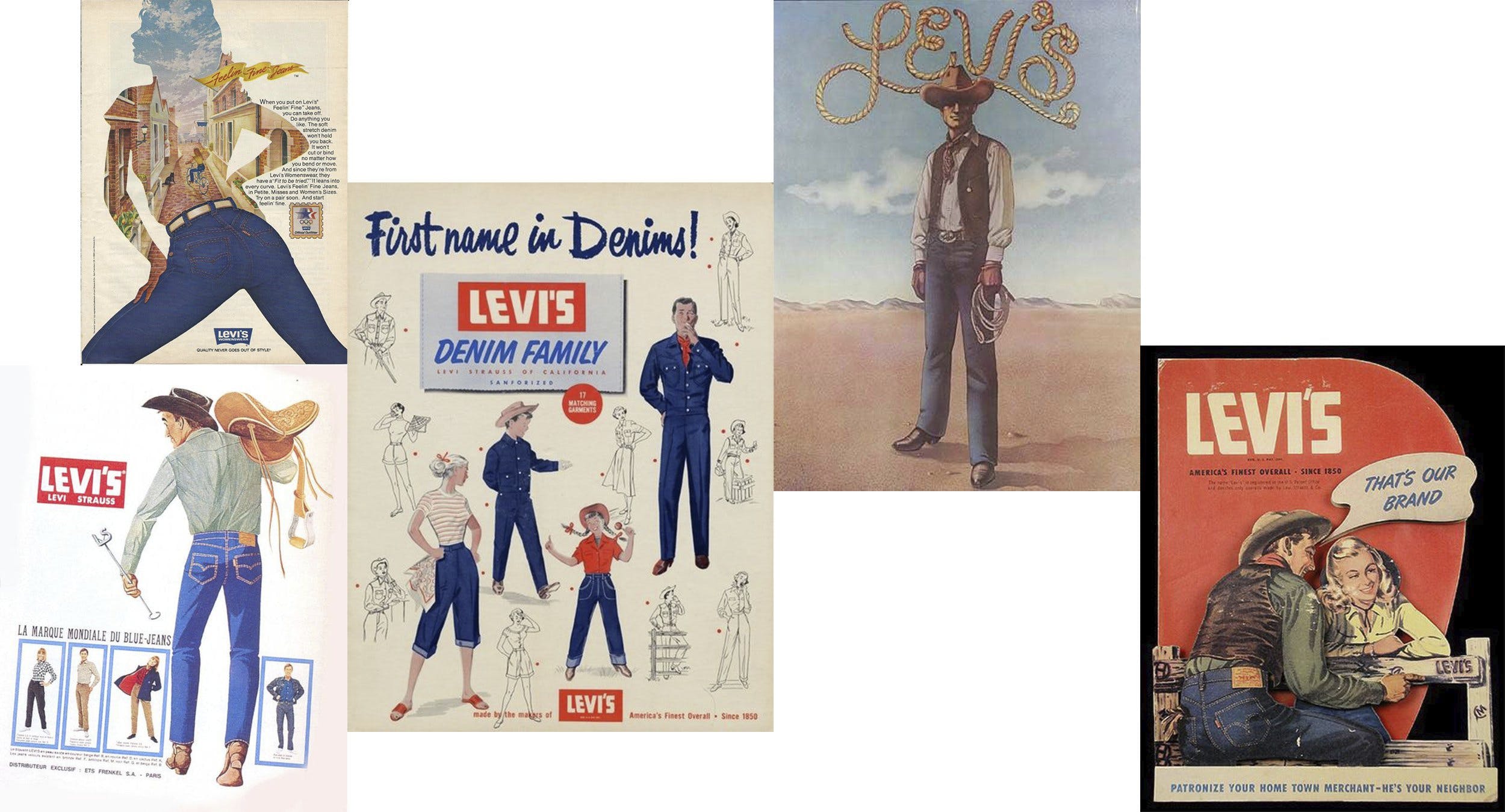 Levi Strauss collaborated with one of his customers, Jacob Davis, who bought cloth and cut work pants reinforced with rivets. The jeans were born, quickly adopted by miners, lumberjacks, gold miners and farmers who saw in them a robust garment, ideal in harsh environments. Faced with numerous imitations, Levi's prioritized quality by creating a model first called XX, renamed 501, the number of the first roll of fabric used to produce these pants.

The jeans evolve in the inter-war period, with the appearance of belt loops. In 1929, the United States was hit by the Great Depression. Farmers and city workers naturally turn to jeans, then inexpensive, to dress. They came back into fashion in the 1930s, thanks to a Levi's ad featuring a cowboy wearing jeans, and a Vogue cover. 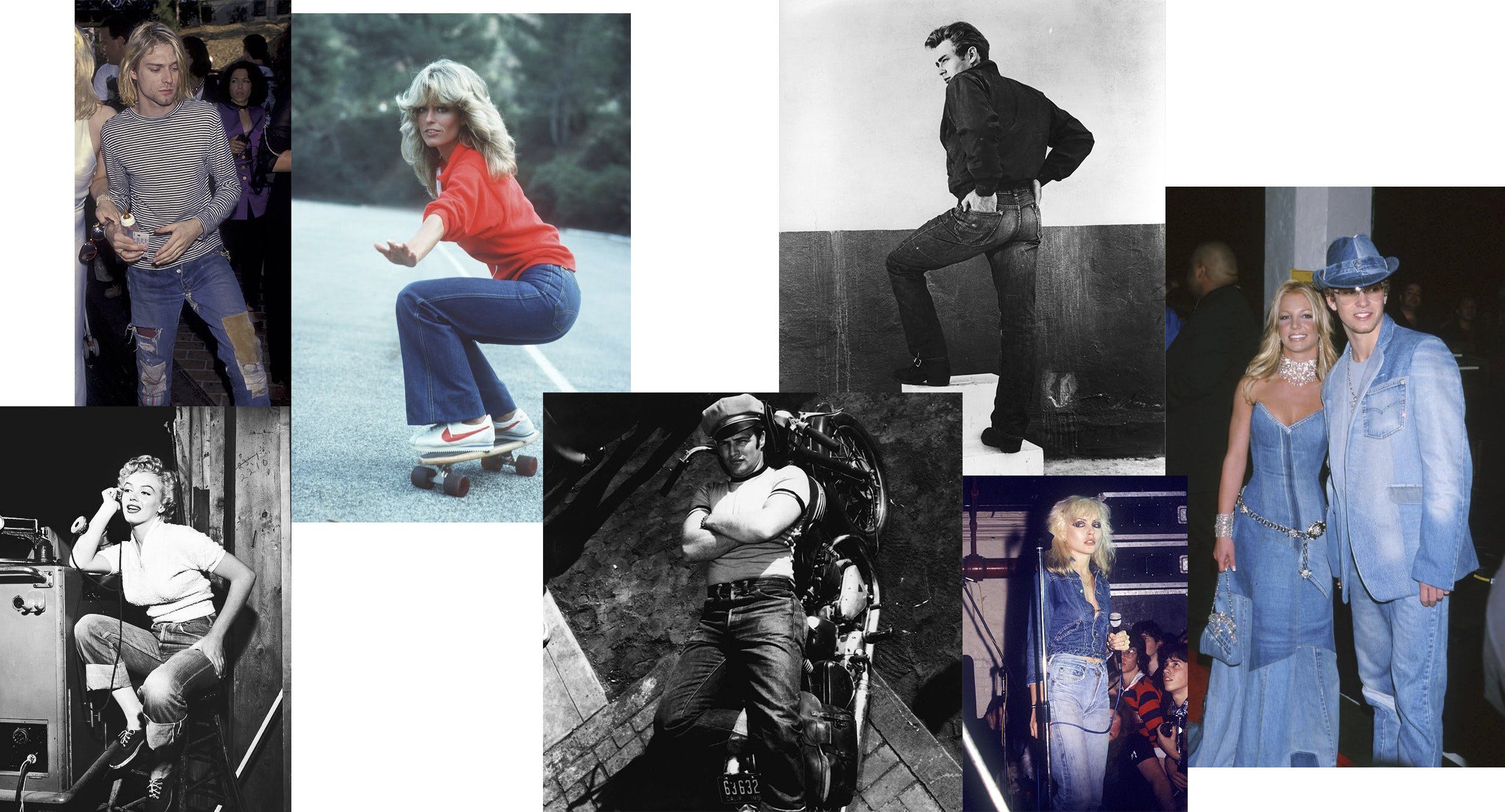 In the 50s, the jeans symbolize the revolt of the young generation, popularized by Hollywood. Marlon Brando inbikerin The Wild Team and James Dean in The Fury of Life are the most famous representatives, while it is banned in American schools. It is an essential piece in the westerns of the 60s, worn in particular by Clint Eastwood, but it is at the end of the decade, worn by hippies, that it really evolves, with new cuts, embroidery, floral ornaments.

Then symbol of the counter-culture, the jeans are adopted by punk bands like the Ramones in the late 70s, then in the early 90s by the grunge movement and its most famous representative Kurt Cobain, leader of Nirvana. In the 2000s the jeans are washed, rhinestones, torn, worn in total look, becoming a symbol of pop culture. The jean has become so familiar that designers are experimenting with it. Maison Margiela imagine it fringed, or reduced to its skeleton, leaving only the seams. Balmain makes cocktail dresses out of it, when Alexander McQueen interprets it in a low-waisted version, so low that it causes a scandal. As for Diesel and its Red Tag line, the jeans are definitely avant-garde. 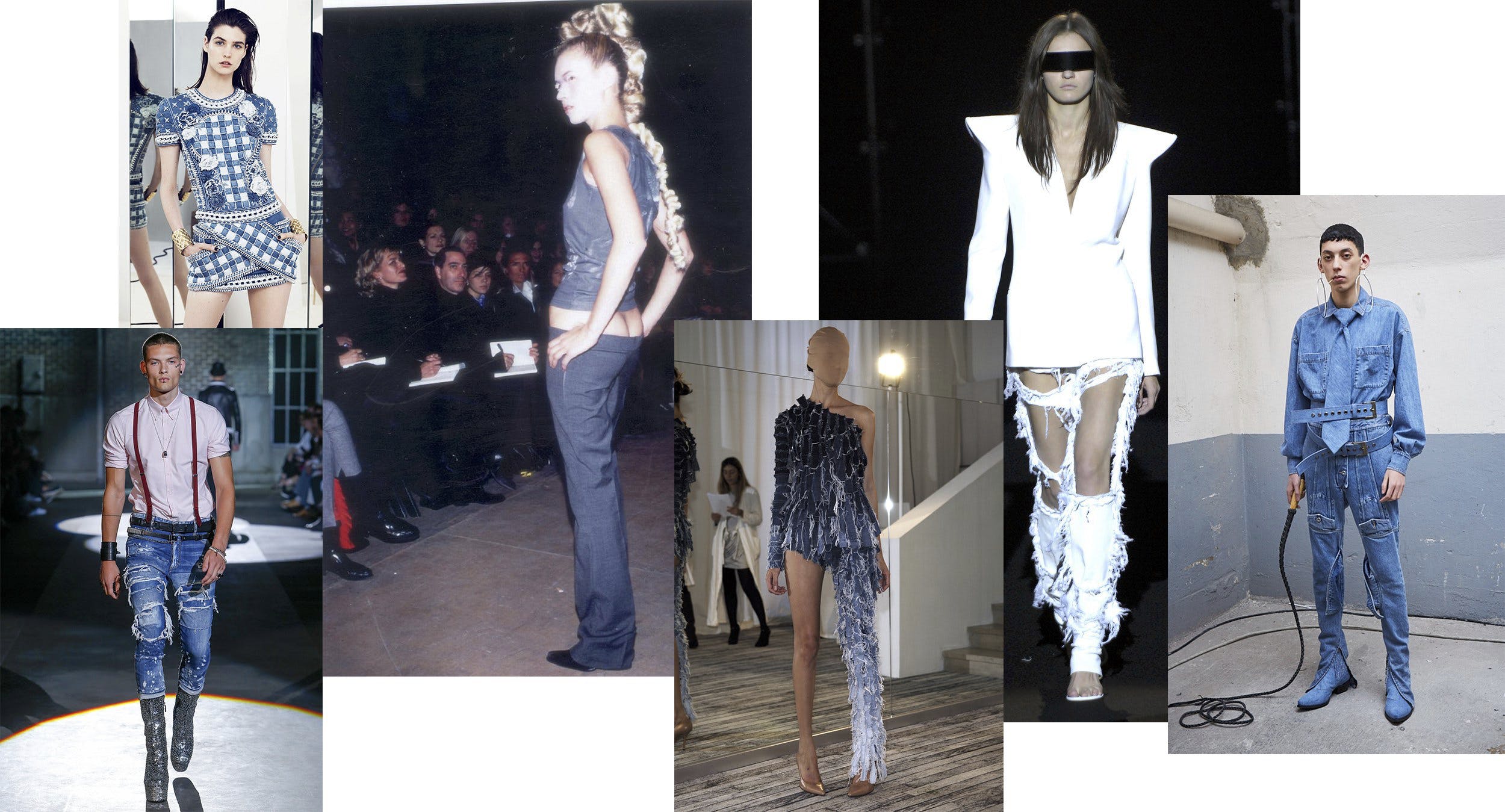 Discover our selection of jeans for men

Discover our selection of jeans for women