Artist. Philosopher. Direct descendant of one of the oldest lines of style. A quick trip to Paris allowed the Californian designer to shed light on certain aspects of his career, to share his passions with us and to offer a very personal point of view on his creative process.

Meeting with Greg Lauren from Leclaireur on Vimeo. 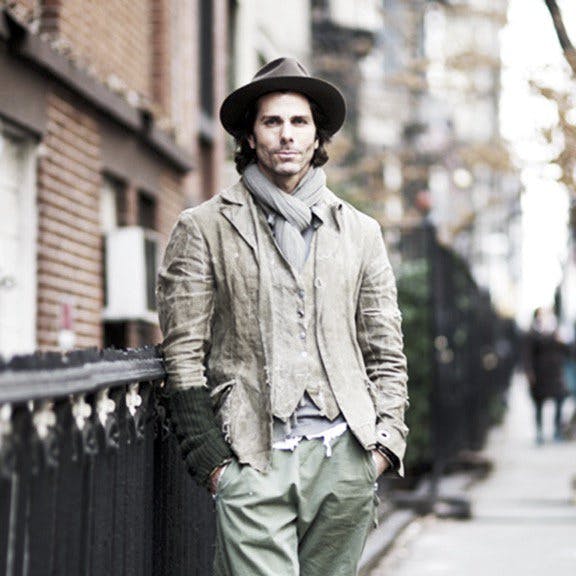 Leclaireur : From painting, since you were an artist, you moved to clothing, how was the transition made?

Greg Lauren: I like to think it was a natural progression.

You have to go back to my childhood, which was both unique and wonderful. My father Jerry Lauren is Ralph Lauren's older brother, and he's been running the men's department for 43 years.

From a very young age, I was immersed in fashion, clothes, style and image, which gave me a completely different approach to the world. At the age of 5 or 6, I knew what vintage was, I was aware of the power of the clothes we wear and how they influence our personality. I was brought up, so to speak, with clothing as a guide. My understanding of many historical figures, for example, was through their clothing.

I tell this story often, but it speaks for itself: I learned all about Ernest Hemingway through his fabulous shirts, his torn pants, his sublime leather belts that he wore to go fishing... I saw photos of him in his hand-knit sailor sweater. I had no idea he was a writer, I was just fascinated by that amazing look, which exuded ruggedness and adventure. It was only later, at school, that I knew who he was, that I discovered one of the greatest authors of all time... That's when I realized what his outfits were trying to express, and it really marked my childhood.

I also started seeing old family movies at a very young age, classics, with my uncles and cousins. Cary Grant and Fred Astaire were our heroes, as well as Batman, Superman and all the other comic book characters. They all influenced me a lot. As a visual artist, I was exploring themes of identity and image. I was drawn to the pain underneath the beauty, to the dark side of this hero culture.

As an artist, as a painter, I felt the need, at some point, to create a work that directs the microscope on me. To dig down and discover my deeper essence. I learned to sew, as a painter, because I had planned to make an exhibition of the 50 most iconic garments from my childhood, teenage and young adult wardrobe. I had decided to make them entirely out of paper, the same Japanese paper I was already using in my painting. This project was a turning point.

I brought my entire childhood to the surface, all my references. I dug this idea that an image, as powerful as it is, is only a piece of paper, while taking the greatest care in my creations. I made everything by hand. In my own way, I examined and questioned the transmission of identity through clothing. After learning how to make a lapel, how to cut sleeves, I made a three-piece suit out of paper that would have been perfect on Cary Grant - if it had been made out of anything but paper! It was a cathartic experience for me. And very quickly, I felt the need to create a real suit, made of fabric, not flimsy paper.

The first jacket I made came from a piece of paint-stained canvas I was standing on in my studio. I grabbed this old piece of fabric, cut it out a little instinctively. It was a complete failure. I had to completely redo the sleeves. I loved the result. I wore that jacket, so perfectly imperfect, proudly, as if it had been custom made on Saville Row. And the feedback was wonderful. I realized that as an artist, clothing was the medium through which I could really express myself, focus all my ideas, touch people immediately with something they could wear, touch, that could even move them.

Since then, this same philosophy animates each of my collections. 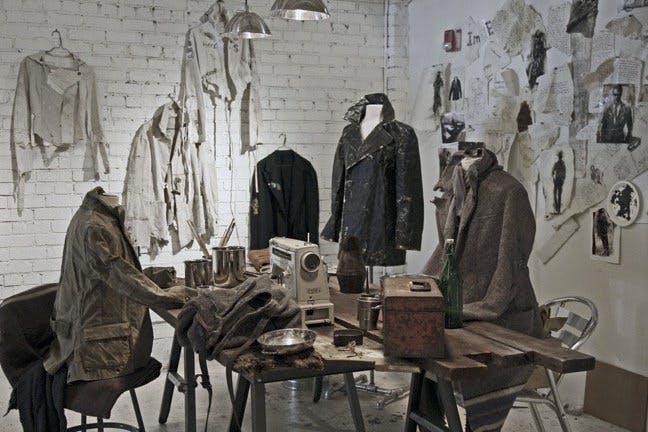 L: Tell us about your studio?

GL: It's absolute chaos, an extension of my first artist studio. I love it. It's where I feel most at home. Functionally, I know deep down, I would have to move, to a bigger place. But the studio has such energy. It's almost palpable. But yes, it's chaos. Even finding a pen, buried under the piles of vintage fabric, is a challenge. It's very messy, but we work in a good mood. All our clothes are cut and assembled in this workshop, we don't make anything industrially.

L: You don't make anything in a factory?

GL: When the collection grew, we tried... Not all of our clothes need to be treated as unique pieces. Once the important details are worked out, some shirts and knits go to local workshops, always very close to home. It's ten percent of a collection, maybe.

L: Military clothing and accessories have become the essence of your work. How did Greg Lauren, Ralph Lauren's nephew, begin this quest for the perfect worn-in fabric?

GL: This obsession is, again, directly related to my childhood. In my father's and uncle's references, there were heroes from another generation and a whole folklore related to uniforms, the one found in the great Hollywood war movies. I discovered all of this when I was about 5 or 6 years old, and through vintage. Very quickly, I visited all the surplus stores in New York. And I learned. They trained me, so to speak, to find the most beautiful patinas and essential details on a military shirt, on a scout shirt or a leather aviator jacket that John Wayne might have worn. I was given this idea that you could become one of these heroes by wearing what they wore. That if you took the trouble to find the right piece, their story, in a way, their courage and their suffering belonged to you.

That's something deeply ingrained in me, as it is in all of us. It's not just a matter of taste, for beauty, for uniforms, which is specific to fashion. For me, the relationship is emotional, it is linked to the question of the image itself.

I am looking for the answer to a universal question that has been in my heart since childhood.

Why do we all want to look like soldiers, when we have no desire to become one? This question obsessed me. I needed to know. So instead of buying a new vintage jacket, I decided to buy the least glamorous accessory of a soldier: his bag. The first necessity. The soldier puts everything he needs in it and carries it from barracks to barracks. Rather than a beautiful jacket decorated with medals and stripes, I chose something basic and functional, but which tells small stories. Soldiers used to stencil their names on these bags, draw on them, leave messages. So I chose this bag and turned it into a beautiful three-piece suit that represents to me a slightly different kind of soldier, the soldier of fashion. There was something magical about the suit: a soul, a story. It had a soul, a story. It had everything that this soldier had endured in his life. I made it something that men would wear every day, and it caused... something.

Since then, I regularly donate a portion of my proceeds to charity, because my collections do not exist to profit from these soldiers. I often collaborate with Operation Men, which I feel surprisingly close to: this organization helps very seriously wounded soldiers, men who have had to be rebuilt in some way, in every sense of the word.

L: You load your clothes with stories and characters so that those who wear them can make them their own...

You know something is going on when you look at a military jacket. I like what happens when you transform that jacket, when it becomes something else beautiful and elegant but in a different way.

I hope that my clothes bring out the individuality of each person who wears them rather than the other way around. Yes, there is an aesthetic: rough, artistic, angular, that is part of this form of destroy elegance. I hope it reveals the true personality of an individual, that part of him that wants to... like when Clark Kent tears his suit...

Maybe Superman is under the suit. Or someone else. What I want is for the clothing to help everyone release what is unique about them. What I believe is that clothing should not be armor, used to hide the truth. Why can't we literally wear who we really are? Why not wear our vulnerability? I write and draw on a jacket because part of me wonders why a garment should represent an image that does not reflect who we are.