Aganovich is one of those love stories that defy convention. Nana Aganovich, a graduate of Central Saint Martins, and Brooke Taylor, a writer and entrepreneur, fell madly in love in London. Since then, the two brand designers have enjoyed a relationship rich in emulation and bold ideas, and have enjoyed a mesmerizing and creative partnership. Based in Paris, the couple reinvents itself day after day, developing compelling stories that fuel unique, deconstructed-reconstructed creations... Their latest initiatives are born out of their growing political awareness of fashion-related production chains, and their desire to explore, to transcend their creative identity following their impending leap into haute couture.

A wind of change is blowing around Aganovich...
We rethought what we wanted to do, in life and in the industry. Once ready-to-wear was taken off the table, we felt ready for a new strategy, one that would better suit us, and we asked ourselves if we could elevate our main line to haute couture in 2018. There was also some pressure to think more "commercial". Normally that means producing a lot of simpler things for less money. But when you make easier, cheaper things, you know that €800 for the dress instead of 2,000, buyers aren't really interested. Even if it's well done, they say, "No, people want amazing things, they don't want your watered down stuff..." So we needed some time to figure out what our advertising could be and we came up with three ideas: that's what we did this year, see if any of them would work. 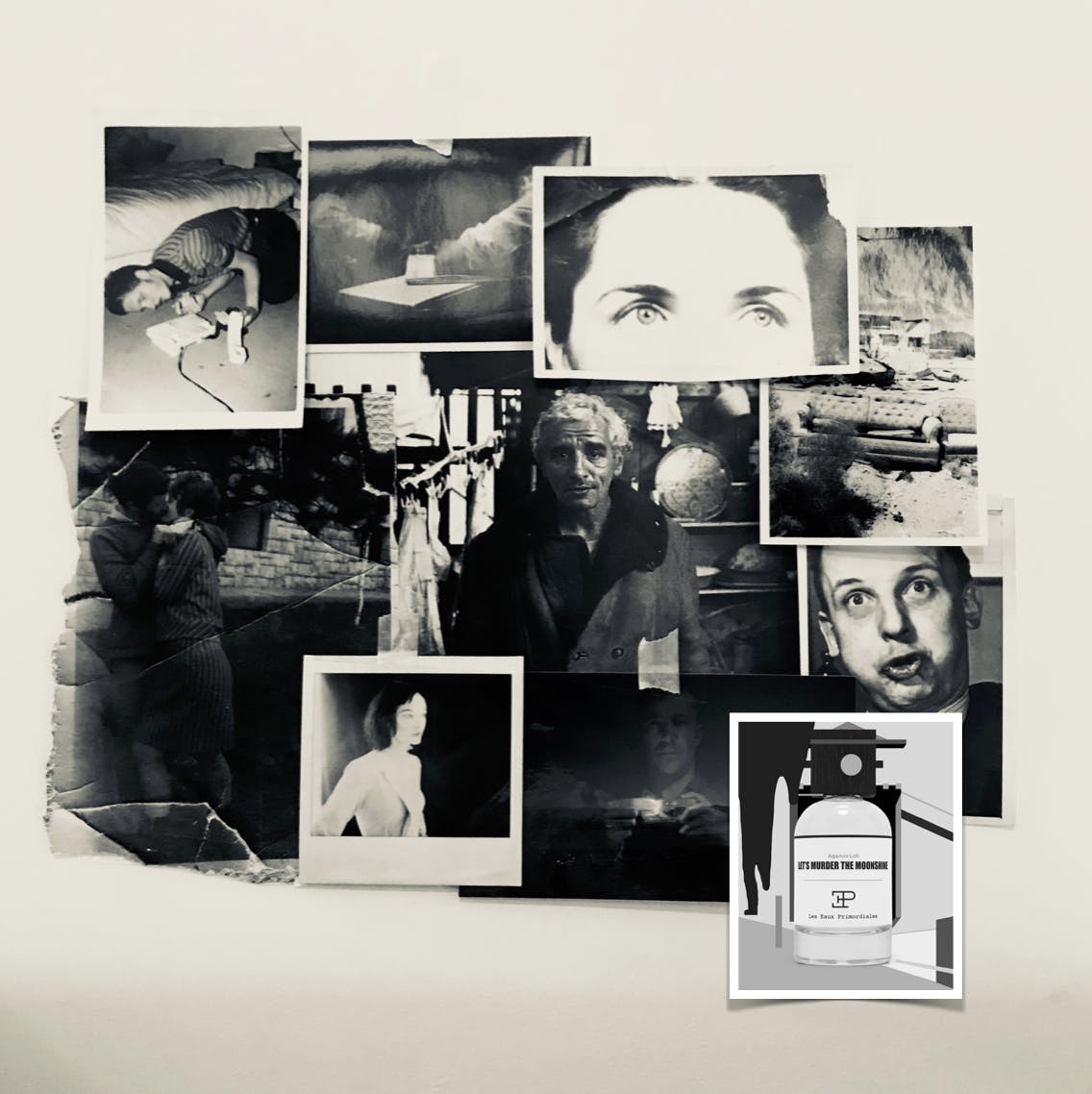 Three ideas?
First, our first fragrance, Murder the Moonshine. With success. Then, Nana watched a lot of documentaries on the politics around fashion production, like The True Cost. She was getting really upset. Even though it doesn't directly affect high fashion, we thought we had to do something. Anything. So we came up with an ethical project called The Invisible Act. It was an attempt to start, at least for ourselves, a dialogue about what is ethical and to ask our suppliers where things come from, and how they are made. It's super complicated: where the thread comes from, where the metal for the buttons was mined, and so on...

How do you create a dialogue within The Invisible Act, outside of your questions to suppliers?
We turned to Kickstarter as a funding platform. Our bankers had pointed us to Kickstarter a few years ago. We thought it might work because it's very open, compared to high fashion. And it worked. The goal was to create a jacket. We launched it in May, and reached our funding goal in June. Through this jacket that we made, we were able to go back to the source of each step. It opened up a whole new area for us. The project is called The Invisible Act by Aganovich because the good things people initiate are so often overlooked, overshadowed by the bad things that are perpetrated. We're delivering the jacket now to the people who bought it on Kickstarter. It's fun to discover territory that is unfamiliar and informal, a pure product of our time. You're just interacting with people. There's not that feeling of exclusivity like in high fashion. 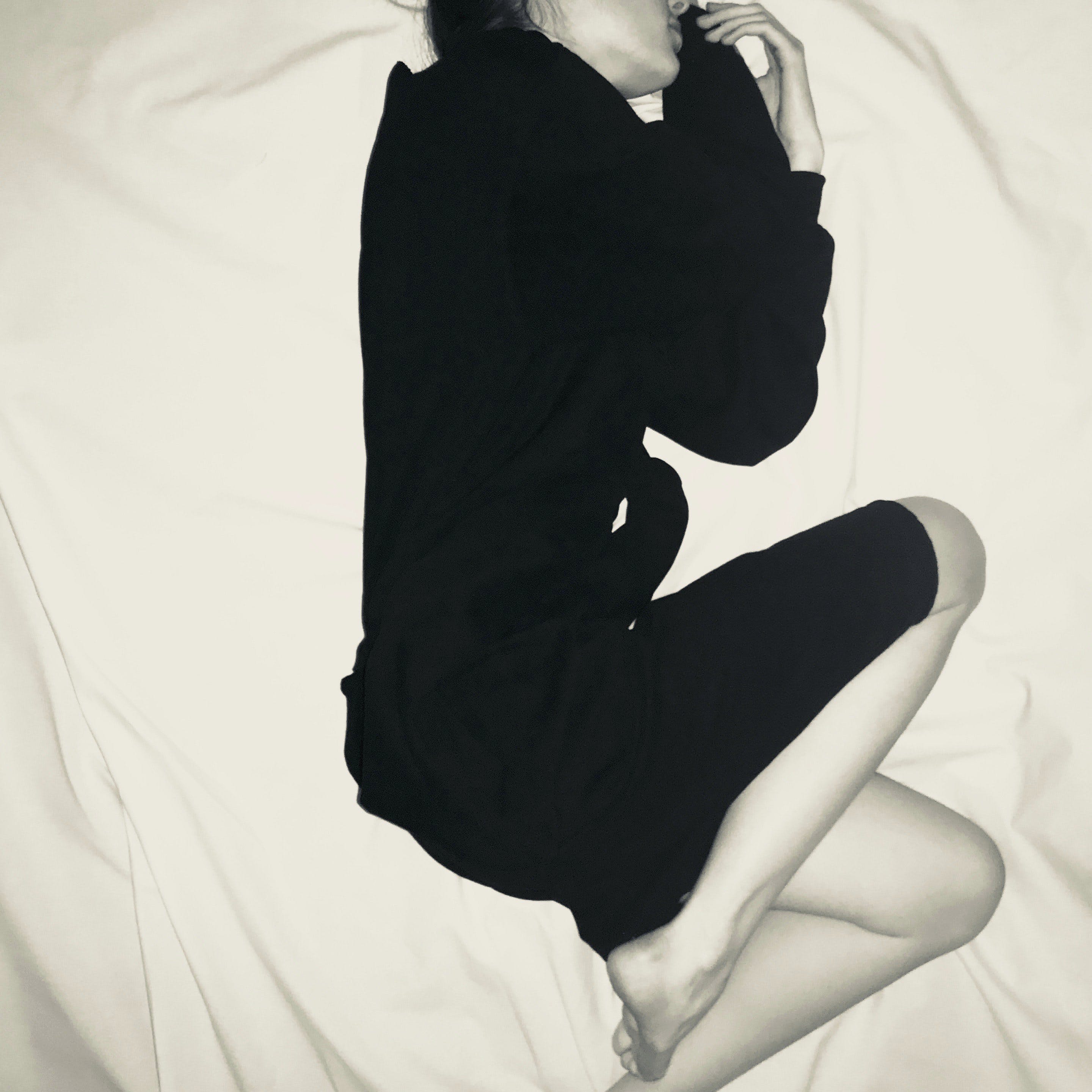 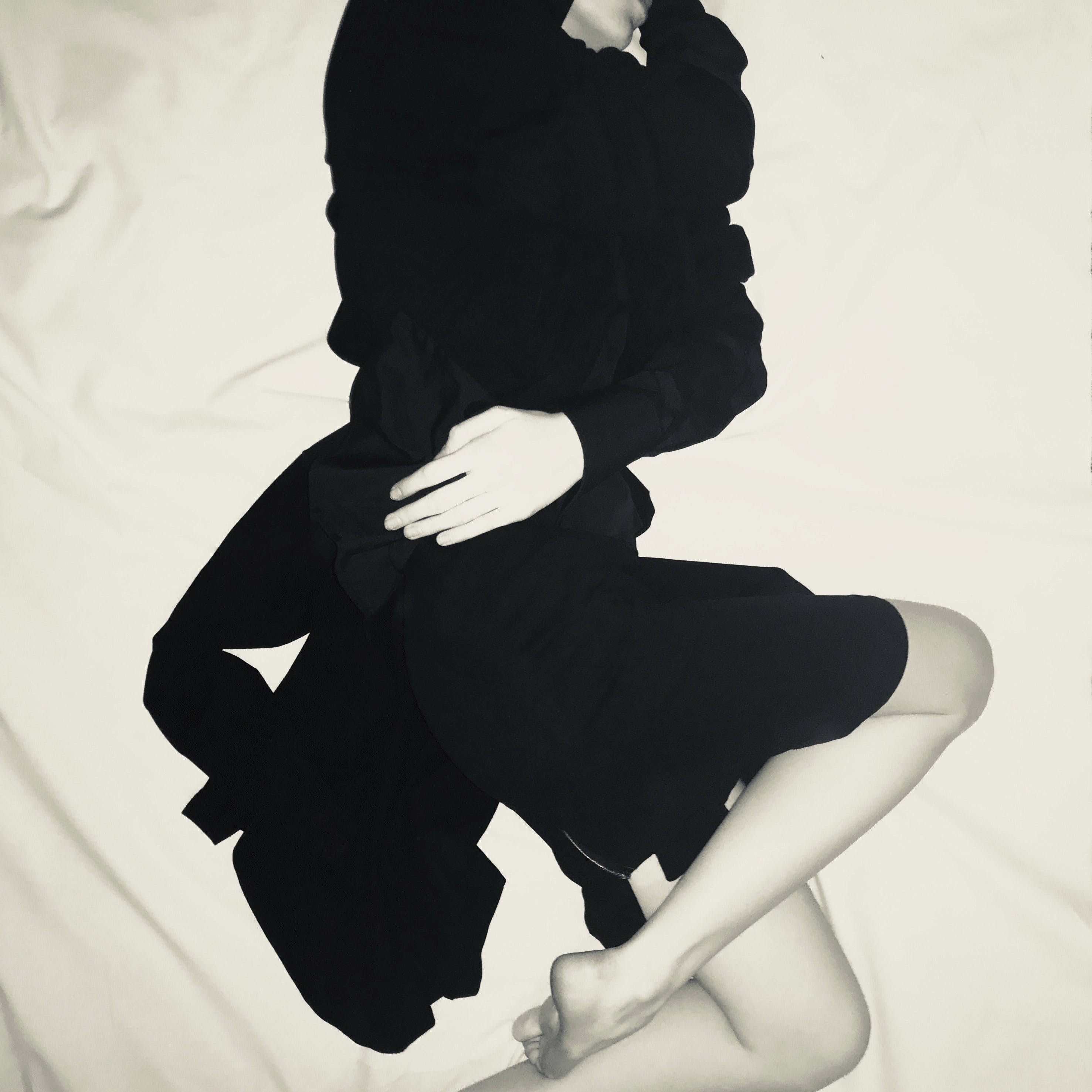 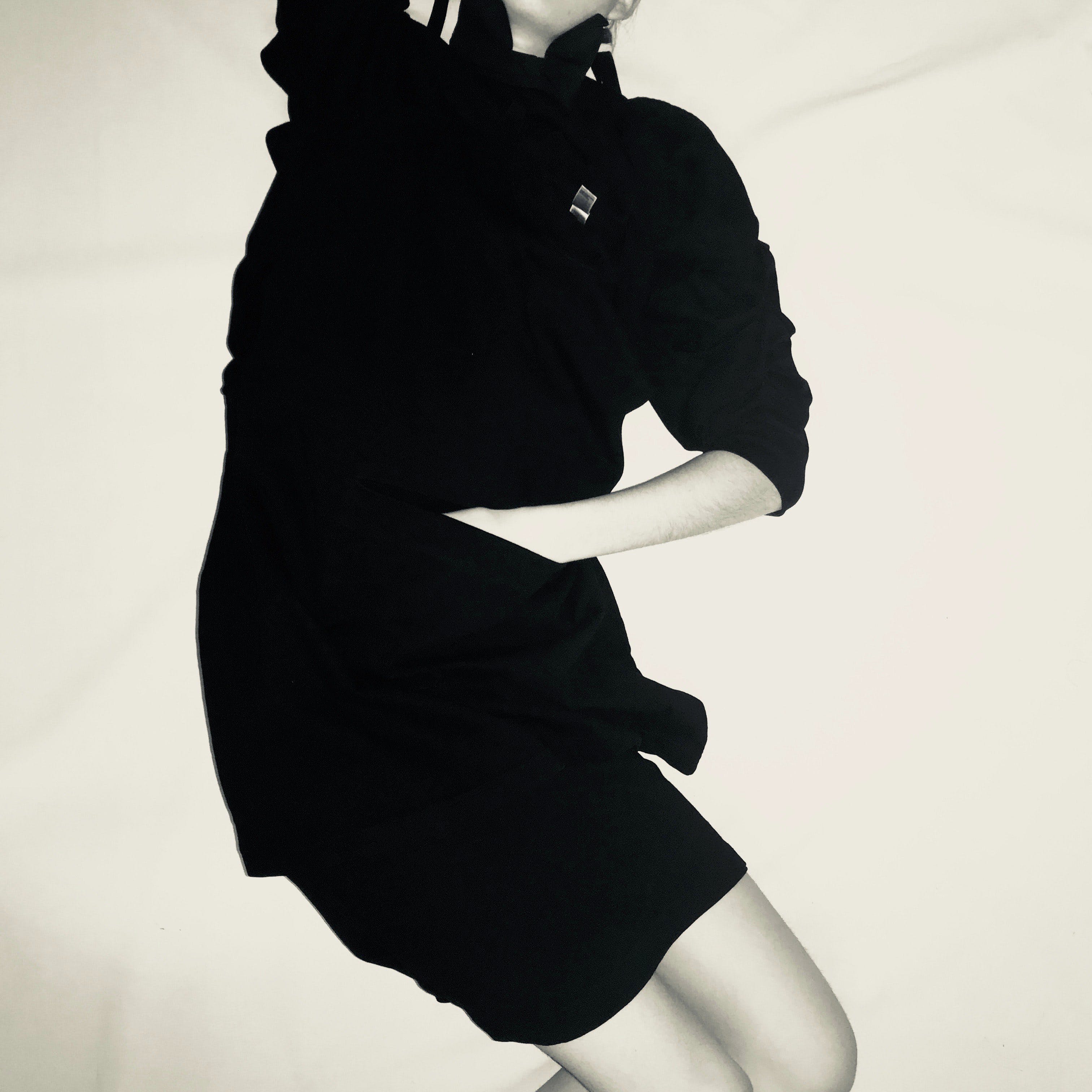 UWill you use this method again in the future?
We've decided to do a Kickstarter every 2-6 months, launching another piece, capitalizing on what we've learned and going a little further. I think the next one will be recycled polyester. Before, you could recycle polyester to make a garment, but you couldn't recycle the garment itself. Now, one of our suppliers has figured out how to recycle clothing. It's like a laboratory. Little by little, we will distill these things into our core business. Every six months, we'll do a basic consumer version at an affordable price, just for the World Wide Web.

Ls your next step, is haute couture your core business?
We're going to incorporate these pieces into the next collection, customize them with more extensive modifications and higher prices. And we'll also learn from the lessons we've learned and enrich the main line. Fashion has to have a certain independence, although we will infuse it with this ethical experimentation that is our approach today. 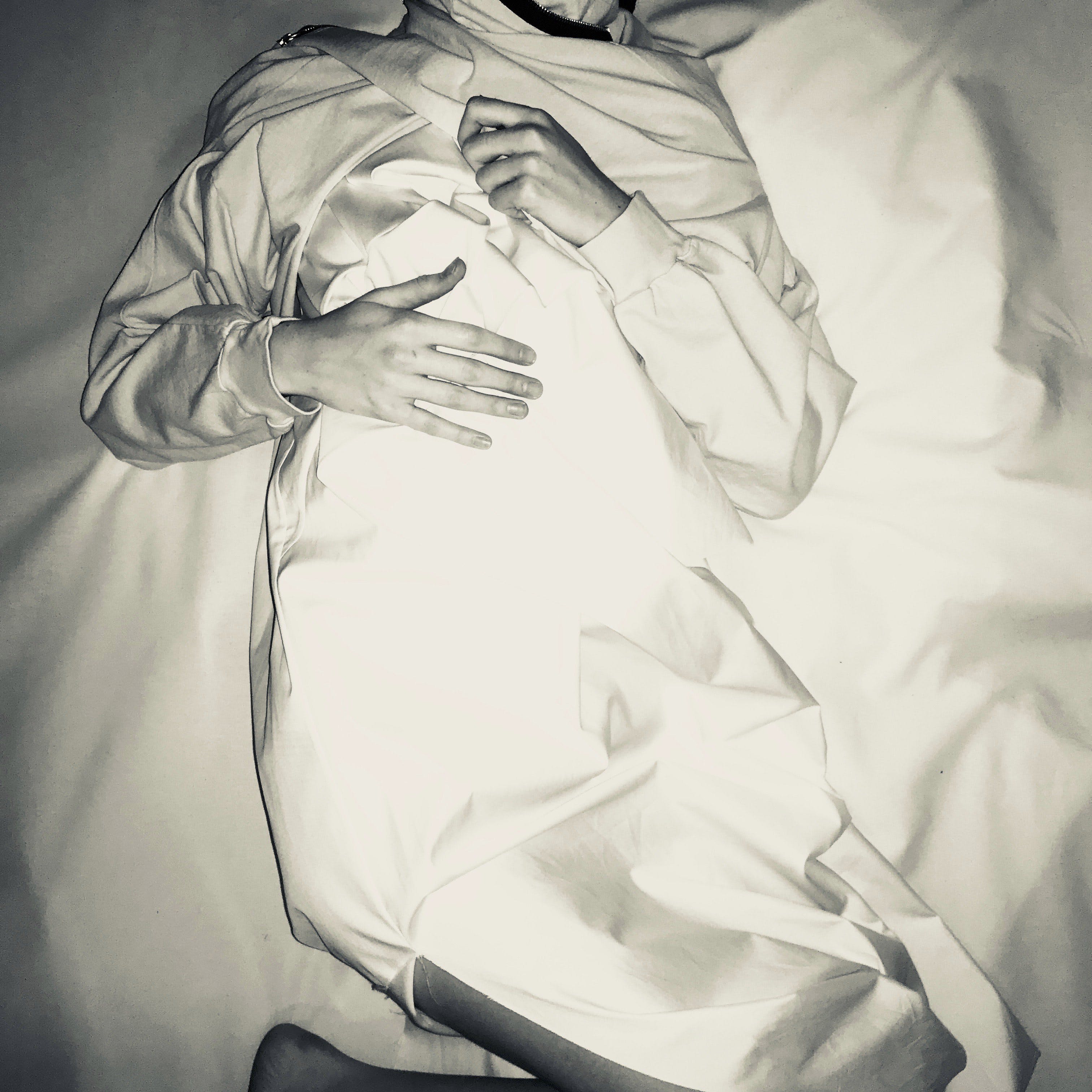 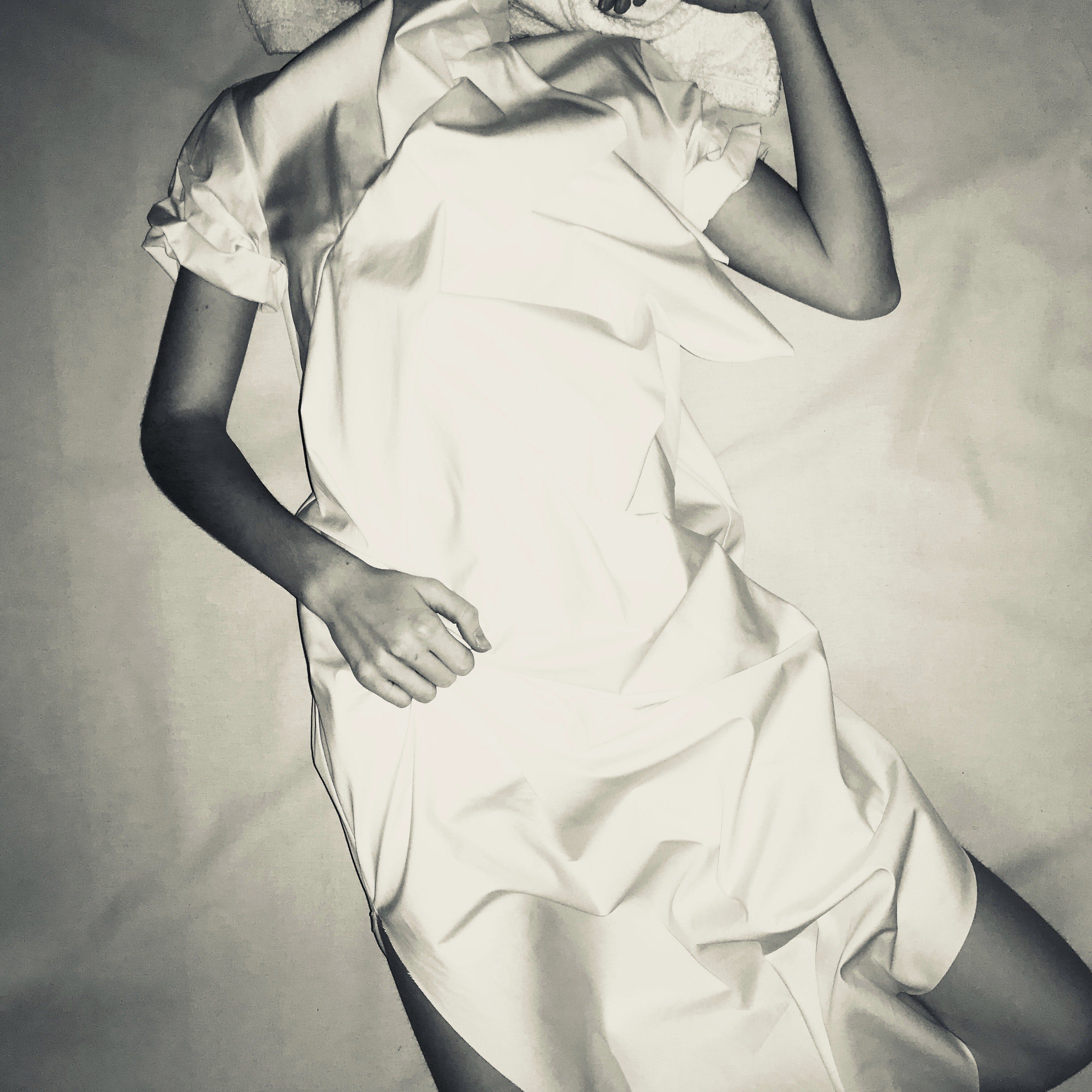 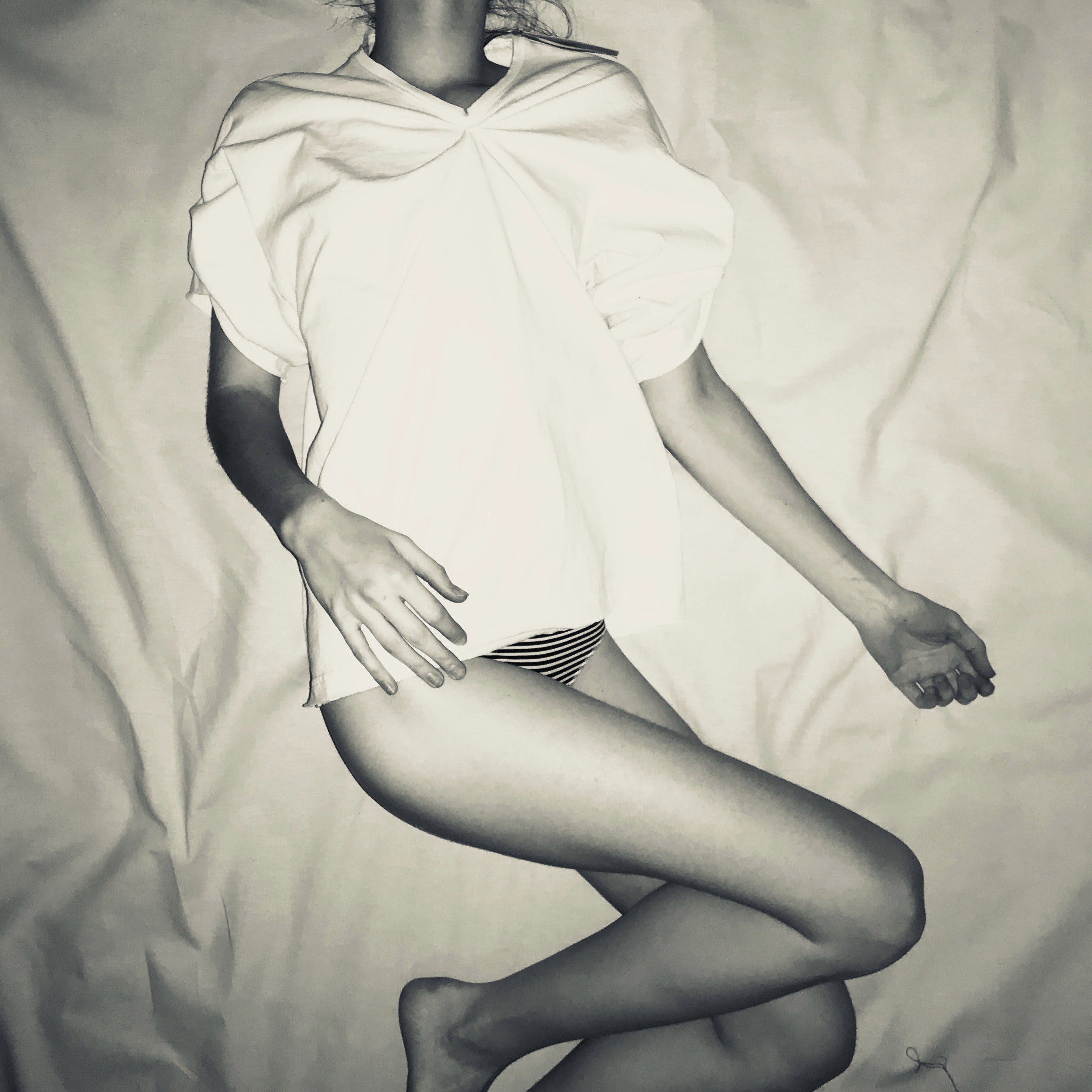 This T-shirt thing... what is it about?
I used to throw parties in another life. I worked briefly with Dov Charney (CEO of American Apparel), organizing an event in L.A. He was a real beatnik, obsessed with all the Beat generation poets. He lived on the road for a while, traveling across America by bus. There's something untamed about him. He's full of energy and loves business. He was ahead of everyone else in terms of Made in America - local sourcing and "vertically integrated" manufacturing. He just started a new company, Los Angeles Apparel. He has a big heart and his employees love him. They did then and they do now: he pays above minimum wage, takes care of families, tries to get the immigration paperwork done...

How do you go from American Apparel to Aganovich?
We went to see him. He lives in Charlie Chaplin's old house, which is where we went, in the early evening. He wasn't home yet, so we waited for him as the sun set over the hill. We were asking ourselves real questions: "What are we doing here? Literally 20,000 miles away from home, at the home of a guy we met 15 years ago." When he arrived, he must have thought we were aliens. We were dressed very... Aganovich. He started with a "Where did you come from like that?" before continuing, saying "I don't know how you ended up here but okay, let's go, let's do this meeting..." And we explained to him, "The idea is that you give us your shirt. We'll take your clothes, and ruin them, basically." We took the T-shirt back to Paris, turned it around in the workshop, to see what we could do with it. Then we took some pictures at Nana's in the summer. The pictures are all taken on a bed, because of the cotton.

Check out these photos from a few years ago, of Nana waking up to the sun. We basically shot the model from above to create a crumpled effect... Then we went completely wild: we flipped the shirts, sewed them together, made pants, put 2 or 3 shirts together to make dresses. Even our friends were confused... they knew we had this t-shirt project, but in their heads we were just going to sell... t-shirts. 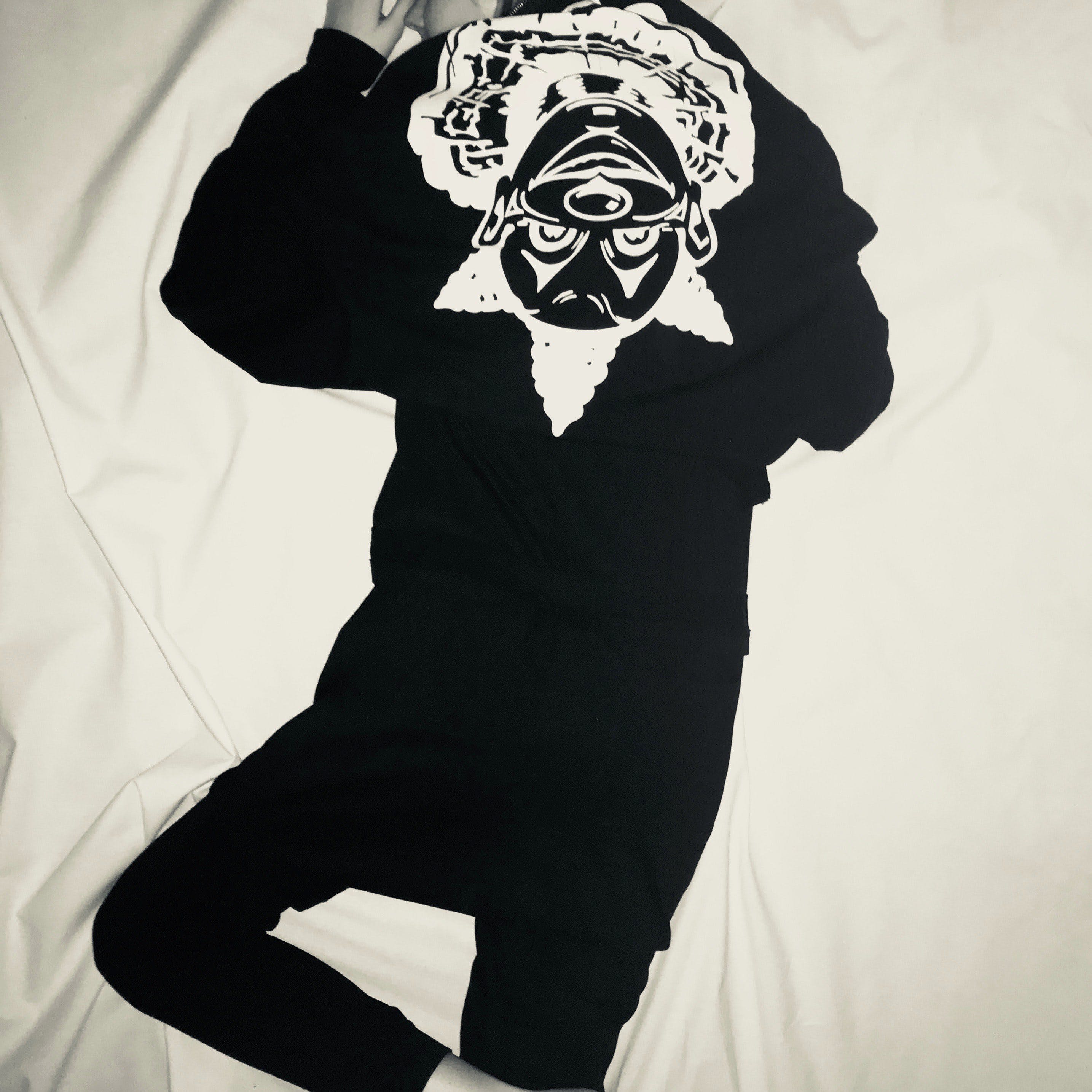 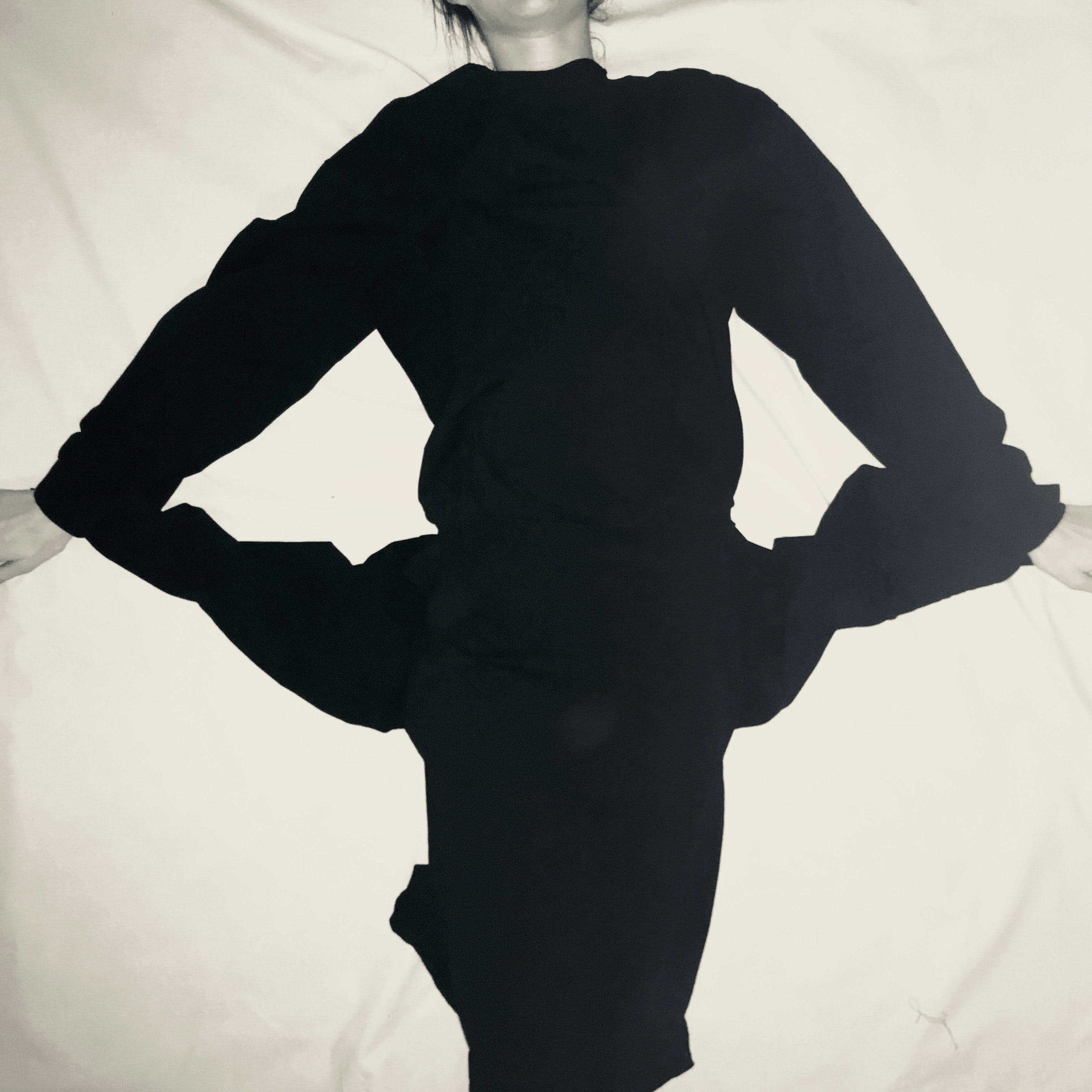 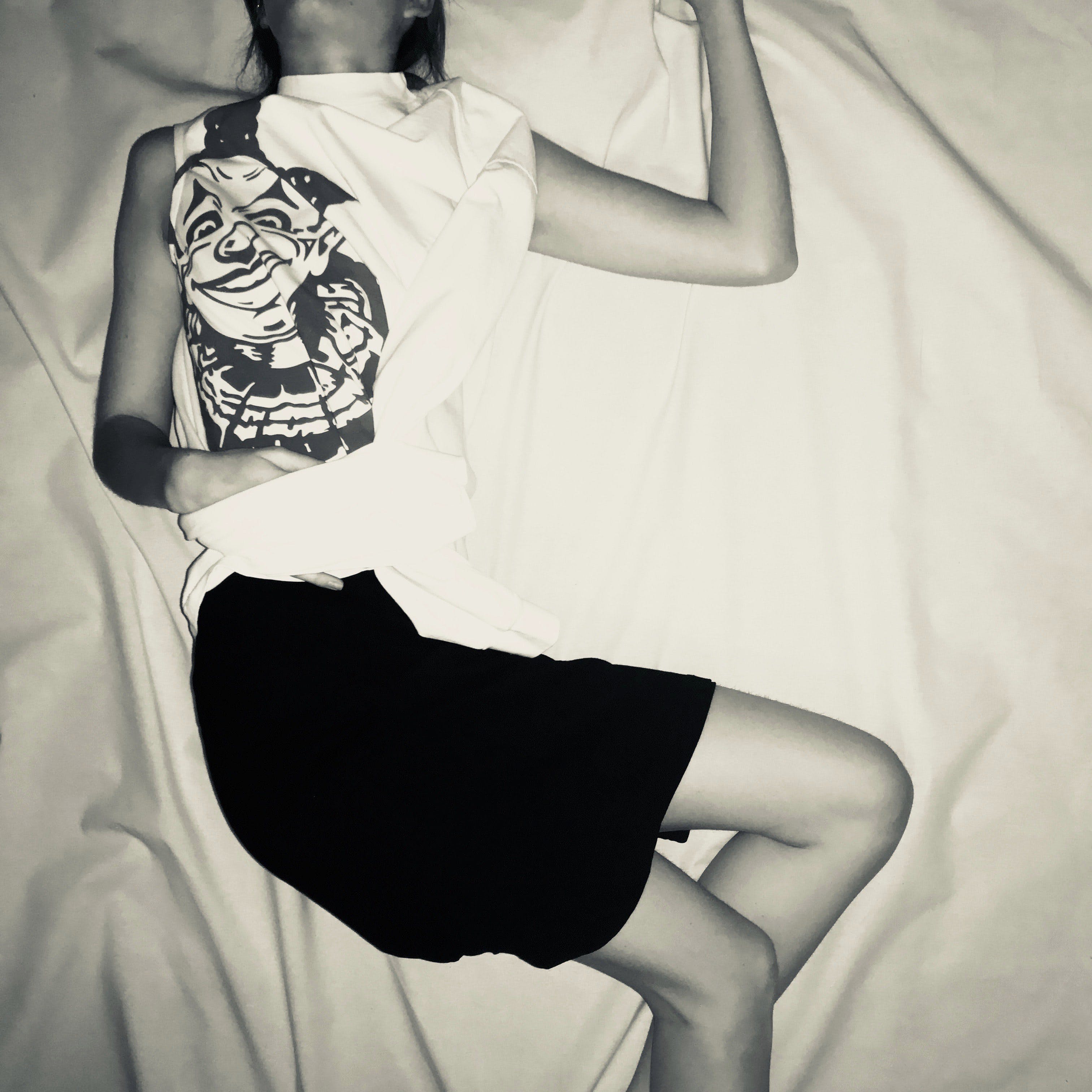 Is this collection presented as Aganovich x LA Apparel?
No, these are pieces Aganovich. We kept the Los Angeles Apparel labels, not only for history and passion, but also for credibility. This is a commercial project - the price is half of what we usually charge. It's a fabric we wouldn't normally use, but it allows Aganovich to be more casual and to cross the barrier of day and night, which most of our designs don't cross. And we can deliver these pieces twice as fast. Leclaireur bought it in October, which was super exciting. Until the last minute, we didn't know if it would work. Dov and his team are happy too, they still can't figure it out, but they are thrilled to be a part of this adventure.

So what's next? Ready for 2018?
We're in constant turmoil, because we never know which ideas will come to fruition. When you get off the ready-to-wear calendar, nothing is guaranteed. But we've had two meetings about haute couture, and everything seems to be moving in the right direction.

Like Aganovichgo back to the origins, to Leclaireur Hérold.

In the same spirit

LOOK OF THE WEEKEND November 9th